When it comes to podcast’s top shows, Podtrac’s latest monthly report shows the medium remains a place whether lots of Americans are going to find the day’s news —whether it’s about the big stories out of Washington or the gossip from Hollywood.

Podtrac reports the New York Times-produced The Daily was the most listened to podcast in November, for the 13th consecutive month. The NPR-produced Up First, which popped to second place in October, remained there last month. The battle is sure to heat up further as NPR has expanded its morning news podcast with the launch of a new Saturday morning edition that will allow the brand to grow its monthly audience. Podtrac says iHeartPodcast Network’s Stuff You Should Know remained in third place in November, while This American Life was No. 4. There was also a new entrant as US Weekly’s Hot Hollywood debuted in fifth place. Hosted by US Weekly editor Brody Brown, the weekly show delivers a rundown of the biggest entertainment news stories of the week. US Weekly’s sister podcast Watch With Us debuted at No. 19.

Here are the top 20 shows for November: 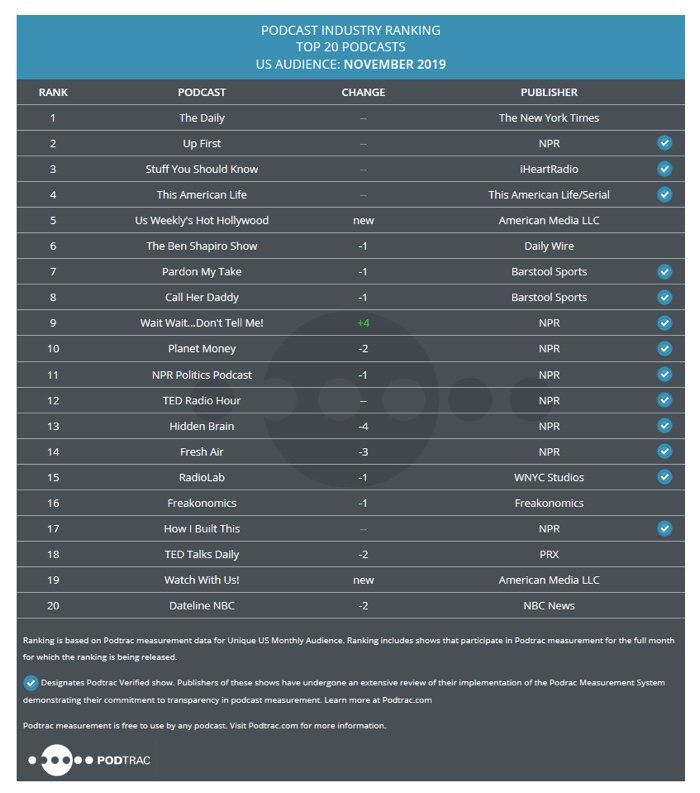 Podtrac’s numbers reflect an update made in April to the measurement algorithm that calculates unique downloads. It was brought about by Podtrac’s embrace of standards developed by the Interactive Advertising Bureau (IAB) Tech Lab. The IAB’s Podcast Measurement Technical Guidelines 2.0 changed what counts as a download. For example, in the past, if someone were to listen to a podcast, press stop, then play again, that would count as two downloads. Now, it counts as one. Plus, someone needs to listen for a full 60 seconds before it counts as a download. Podtrac has said that most podcasters didn’t see a “substantial” change in their unique monthly audience numbers, however download numbers mostly declined because of the new guidelines.

Politicians Line Up To Launch Podcasts.

Being Local Grows In Importance Among Radio Listeners For 4th Straight Year.