AC’s share in PPM markets rose by a staggering 90%, from the November 2019 survey to Holiday 2019, eclipsing the 86% increase posted in 2018 and the average 76% gain during the period from 2012-2017. “Each year it gets bigger,” Jon Miller, VP, Audience Insights at Nielsen, tells Inside Radio. “People are engaging even more with holiday music, particularly on the AC format. The appetite just seems to keep growing.”

New data quantifies that audience craving for Christmas music and the impact it has on those critically important P1 listeners who provide the most quarter hours to stations. For this separate analysis, Nielsen examined 52 stations in PPM markets that went all Christmas in 2019. It compared key audience metrics for the December-Holiday books (the two surveys impacted by playing all Christmas music) with the January-November survey periods (the rest of the year). While it’s been argued that the Christmas format drives some P1 listeners away to other stations, the new data shows average P1 daily cume skyrocketed by 90% to 178,563 in the December-Holiday books, from 93,916 during the rest of the year. As Miller frames it, “90% more people became P1s to these stations in those holiday months.” P1 weekly cume for the 52 stations (which are mostly ACs but include a few classic hits outlets and other formats) rocketed up by 85% from 210,030 to 388,599. 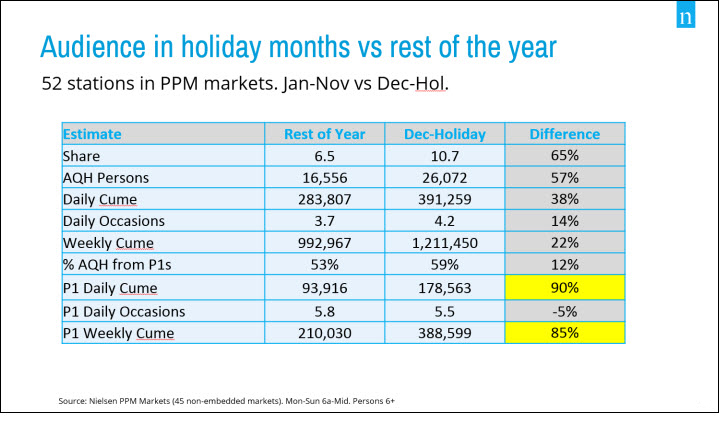 “What we’re seeing is there is suddenly a lot more people that become P1s for those two months,” Miller explains. “A lot of them are your normal P1s from the rest of the year but you almost double your P1daily cume during December and Holiday.”

The challenge – and opportunity – for programmers is converting those scores of newfound P1s into regular listeners when the station returns to regular programming. “People that are P1s during December and Holiday, because they really like Christmas music, go back to [other stations] after their normal patterns return,” Miller says. “That’s a challenge for PD’s: how do you capitalize on that huge audience that’s there for those two months, when we know that a lot may not be staying when January hits.”

From a demographic standpoint, the audience composition for the 52 stations in the study looks remarkably similar during the December-Holiday period as it does for the rest of the year. Just over half are in the 35-64 demo for both periods, although there is a slightly higher concentration under the age of 35 during the December Holiday span (34%) than the rest of the year (30%). “It’s a little younger but not a dramatic difference,” Miller points out. “We also looked at gender and ethnicity and saw almost no difference whatsoever.”

The analysis again documents, in graphic detail, the ratings dent that other formats take as legions of listeners find a new favorite station for the holiday season. While AC’s share rose 90% from the November survey to the Holiday book, country fell 18%, Pop CHR tumbled 10%, hot AC dropped 9%, classic hits lost 8% and urban AC ticked down 4%.

As AC keeps setting, and then breaking, ratings records, the question remains: When will it plateau? “It keeps growing each year,” Miller says. “What will 2020 bring? The trends say it will keep getting bigger.”

Politicians Line Up To Launch Podcasts.

Being Local Grows In Importance Among Radio Listeners For 4th Straight Year.