Radio stations from coast to coast are out in their communities this holiday season, collecting food and gifts for less fortunate families. 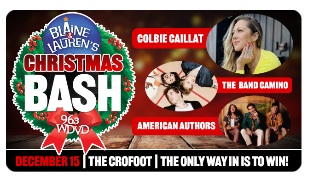 Cumulus Media hot AC WDVD Detroit (96.3) will host “Blaine and Lauren’s Christmas Bash,” which will benefit Toys for Tots of Metro Detroit. The Thursday, Dec. 15 concert, hosted by morning show hosts Blaine Fowler and Lauren Crocker, will feature performances from American Authors, The Band Camino, and Colbie Caillat. Tickets will be given away on air with winners asked to bring a new unwrapped toy to the show.

“I can’t wait for this night! It is going to be so much fun celebrating with our morning show co-hosts, Blaine and Lauren, as they welcome three incredible acts to the stage,” Director of FM Programming David Corey said in a release. “I am also excited to collect toy donations from our generous contest winners for Toys for Tots.” Huntsville (104.3) held the first-ever “Tory’s Turkey Drop,” which awarded 104 families with a free turkey. Spearheaded by midday host Tory Wuycheck, the station partnered with a local auto dealership for the feel-good promotion.

“With the rising cost of living, we wanted to make sure that our neighbors struggling to feed their families this year had a turkey for Thanksgiving dinner,” Wuycheck remarked. “The Turkey Drop event was set to start at 3pm on Monday, November 14th, with turkeys being passed out at 4pm. People started arriving at Landers McLarty Nissan at noon! We were able to distribute 104 turkeys for the first 104 families in about 18 minutes.” 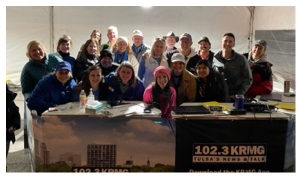 “This event is our official kickoff to the holiday season, and we count on Green Country listeners to chip in and help us grant wishes—they always respond to our call for help,” Director of Branding and Programming Levi May said in a release. “Crossing the $4 million mark to fund the wishes of local kids is an honor that makes us very proud.”

Saga Communications WNOR (98.7) and classic rock WAFX (106.9) Norfolk held the 26th annual “Mayflower Marathon Food Drive” on Friday, Nov. 18. The event was held simultaneously at four locations in the market with all food and monetary donations benefitting the Foodbank of Southeastern Virginia and the Eastern Shore and the Virginia Peninsula Foodbank.

“The shelves at the Foodbank are overflowing with much-needed donations thanks to the support of our generous listeners and client partners,” President/GM Wayne Leland said. “The FM99 and 106.9 The Fox 26th Annual Mayflower Marathon will create more than 730,000 meals. Thanks to the Foodbanks and everyone who made a donation for helping to feed Hampton Roads.”

“This is yet another great example of how live and local radio can truly help change lives,” Senior VP/Market Manager Jeff Gonsales said in a release. “We’re so proud of our team in helping share these inspiring stories, as well as our amazing fans for their incredible generosity in giving.”

AC “Star 101.5” KPLZ Seattle wrapped up its 12-day toy drive on Monday, Nov. 21. Morning show host John Moug lived on a 14-foot-high scaffolding for the duration of the toy drive, while co-host Angie Morales served as the “boots on the ground” collecting bikes, new unwrapped toys, gift cards, and cash to benefit the Salvation Army.