What goes up must come down. The law of gravity? Sure, but it also seems to work for podcasters too. Two weeks ago Podtrac said the Arts category was the week’s biggest gainer with a 23% week-to-week jump in downloads. The genre gave some of that back last week when Podtrac says it had the softest week-to-week numbers with downloads down 14%. Besides not giving up all their gain from the prior week, Arts podcast downloads were also up 55% year-to-year.

The Business genre had the best growth rate last week. Podtrac says its downloads ticked up five percent compared to a week earlier. It was the only major category showing growth. Those that declined included Sports (-5%), Comedy (-3%), News (-3%), and Society & Culture (-2%). Three genres-- Health & Fitness, Science and True Crime -- were all flat week-to-week.

Overall, Podtrac says downloads were down three percent last week compared to the prior week. There were however up 46% over the corresponding period last year for Podtrac measured shows. 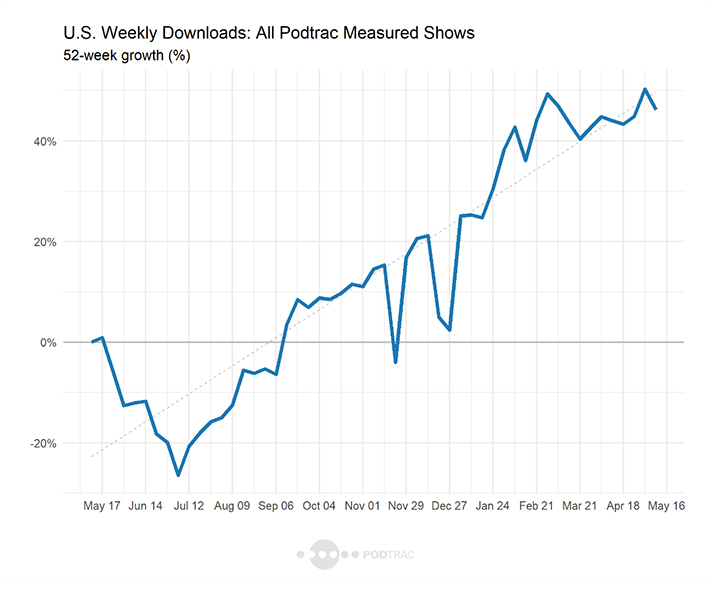 Podtrac reported earlier that ten of the top 20 publishers it measures had an increase in their unique media audience numbers during April. The top publisher remained iHeartRadio, with more than 441 million downloads and streams and a unique U.S. audience of 31 million. The rest of the top five was also the same: NPR, Wondery, New York Times, and NBC News.

Overall, Podtrac reports the average publisher had a two percent month-over-month decrease in their U.S. unique monthly audience last month. But compared to a year earlier, April 2022’s unique reach for the top 20 publishers was up 16% versus April 2021.

In terms of downloads, Podtrac says global downloads for the top 20 publishers overall were down five percent month-over-month during April. But they grew 31% compared to the download numbers from a year earlier.