The guest booking platform Interview Valet has released its annual survey of how podcasters are producing their episodes. The results can mostly be put into a single sentence: Today podcast interviews mean recording on Zoom, with video, any Wednesday, 32 days before the episode airs.

The video component may be the biggest surprise. It finds that 74% of podcast interviews included video. This is up drastically from 2019 when, pre-pandemic, fewer than one in five incorporated videos.

A big reason is how podcasts are recorded. While guests were previously invited to a studio or asked to pick up the phone, thanks to the pandemic, Zoom has infiltrated all aspects of life, including podcasting. Interview Valet says three-quarters (76.4%) of all podcast interviews in the first half of 2022 were recorded on Zoom. And Skype, which accounted for a majority of interviews pre-pandemic, now accounts for less than two percent (1.8%). The survey puts Streamyard (5.9%), Riverside (4.9%), and telephone (3.2%) recordings in the middle.

“Podcasts by and large are done on Zoom,” said Tom Schwab, founder of Interview Valet. “That’s not the same as what’s the best platform out there, but people just go back to what they have gotten comfortable with, and that is by and large with Zoom,” he said on a webinar detailing the findings of their survey. While Schwab says Skype has “disappeared” for most podcasters, large corporations that are focused on security tend to still rely on the platform due to worry about Zoom hacking.

Compared to the prior year’s survey, Interview Valet says Zoom gained 2.7% of the market in 2022 while Skype, Zencast, and telephone recording lost ground in the past year.

“The number of interviews done over the phone continues to decrease and every listener is saying thank God, because the quality on the phone is awful,” Schwab said.

The podcast survey also looked at the habits of producers and it finds most interviews are done midweek, with Wednesday (24.1%) narrowly edging out Tuesday (24.0%) and Thursday (22.3%) as the most common day to record a podcast. Fewer than one percent of interviews were done on either Saturday and Sunday.

That starkly contrasts with trends seen during the COVID restrictions of 2020 and 2021, when hosts recorded all week long said Schwab. “It’s almost like it was back before the pandemic,” he explained. “On the weekends, people are largely not working. This is such a big change from 2020 when every day was the same, it really didn’t matter.” “It’s more like print media than radio where you get on and get heard right away,” Schwab said. He also says that the timeline has grown as the pandemic’s impacts have lessened.

The survey also shows that despite reports this month that some guests buy their way onto a show, the practice remains an anomaly more than a fixture of the industry. Interview Valet says fewer than five percent of podcasts charge guests to appear on their show. Among those that do, the CPM for those appearances runs a wide gamut – from $25 on the low end to as much as $150. 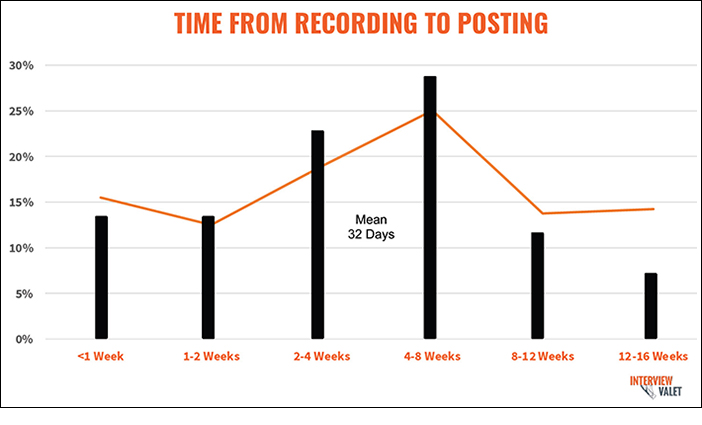 Data used for this study came from Interview Valet's proprietary database for episodes aired from January 1 to June 30, 2022. All shows included were in the top 20% based on estimated downloads. It also notes that because of Interview Valet's focus on business, entrepreneurship, leadership, finance, investing, and health/wellness shows, the results may not be indicative of other categories or smaller shows.