While traditional radio companies continually evaluate ways to increase ad revenue and integrate new strategies to hold onto audience amid a consistent stream of new audio competition, there is one player in the radio arena whose approach is, one might say, more inspired by faith. Christian broadcasters have quietly amassed thriving broadcast platforms whose audience and revenue readily compete with the likes of iHeartMedia or Entercom. And leaders in religious-based programming have led their own version of a quiet storm: Both Salem Media Group and Educational Media Foundation (EMF), the two largest players in the space, are also engaged in aggressive growth mode. The former bought 10 Disney stations in 2015, while the latter lapped up Entercom’s KSWD Los Angeles last November.

Even within the sector, these two players are thriving via completely different business models. The publicly traded Salem largely barters its ministry and conservative talk programming on a nationwide basis; while EMF operates a vast network of non-commercial music stations that thrive on listener contributions.

The secret to their success? Stations catering to

a Christian (and sometimes cross-promoted conservative) audience represent more than entertainment and information. “There is a stickiness that people have with this format, much more than any I’ve been associated with. It’s more of a lifestyle than a radio station. It’s part of their daily life,” EMF CEO Mike Novak tells Inside Radio. “The way we phrase it around here is that it’s like a marriage. Most people look at us as a portion of their family, as a way to help them get through their day.”

Adds Christian consultant and founder of Finney Media Chuck Finney, “Passion for the format is enormous. Christian radio listeners don’t just like their Christian station—they are so positive about it that word of mouth gets the word out. The Christian format truly is a sanctuary, a support and an encouraging presence for the listener.”

Let’s back that up with some numbers. Looking across the entire FM dial, including non-comms—according to Inside Radio’s January 2018 format tally—country has the largest number of stations nationwide (2,175) followed by news/talk (2,027)—and then religion (teaching/variety, at 1,948) and contemporary Christian (1,191).

Mind you, add the latter two and you’ve got 3,139 full-time stations airing religious programming—not taking into consideration the likes of Black Gospel, Southern Gospel and Gospel (another 505). For comparison, there are 1,165 Spanish stations on the FM dial, 623 CHR outlets, and 597 AC stations.

The industry itself is also a powerhouse. National Religious Broadcasters was founded in 1944 by 150 evangelical radio broadcasters facing corporate censorship due to their theological convictions. The organization now boasts 1,200 members, 550 of whom comprise radio stations and networks. NRB president & CEO Dr. Jerry A. Johnson says, “Today, Christian radio—in preaching, talk and music formats—is a vital platform for evangelicals to spread the gospel of Jesus Christ and to contend for the biblical worldview. I’m confident about the future of Christian radio.”

Indeed, Salem gives credence to that spirit. The public company’s 115 O&Os and four LMAs are spread across 40 markets, with 74 stations in the nation’s top 25 markets and 33 in the top 10. Add to that more than 3,100 network affiliates for its conservative talk programming. Salem Media CFO Evan Masyr—speaking at the recent Noble Financial Capital Markets’ NobleCon14 conference—said, “People don’t often recognize that Salem is the third largest radio broadcaster in the top 25 U.S. markets, behind iHeartMedia and Entercom.”

Leading the call are its 41 Christian teaching & talk outlets and 33 conservative news/talkers, alongside 13 contemporary Christian, seven Spanish Christian teaching & talk and 12 business stations. But for sure, the company’s fortunes hang on T&T, fostering 48% of its revenue—almost entirely sold as block programming to national non-profit ministries and local churches. According to Masyr, this provides Salem “higher margins than traditional spot advertising,” with program renewal rates that exceed 95% annually, even with 2.5-4% annual rate increases. 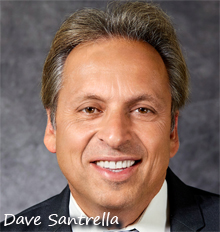 David Santrella, Salem’s president of Broadcast Media, tells Inside Radio, “That will always be our ‘foundational’ format. It is our largest format both in terms of stations and revenue and it is almost always the first format we operate when we go into a new market. Partnerships with some of our ministries go back over four decades, and listeners continue to respond to the message communicated by these ministries.”

Salem’s 13 contemporary Christian “The Fish” music stations, targeting women 25-54, generate 22% of its radio revenue; while the 33 conservative news/talk outlets, in which Salem sells 8 minutes of local inventory and garners 5 minutes of national inventory, account for 21% of its overall revenue.

“News/talk is a fantastic complement to Christian talk,” Santrella notes. “The results of the 2016 Presidential election tell you that there is a quiet but powerful force that’s willing to mobilize for a cause they believe in. There’s an obvious overlap between that group and the kind of radio stations Salem programs and the web assets we provide. And our lineup of hosts does a terrific job in rallying those listeners for conservative causes. Hugh Hewitt on CNN was great publicity for us as well.”

And then there is Salem’s growing footprint. Since 2015, it has acquired 16 radio stations and 32 translators—including 10 outlets from Disney in 2015. According to Masyr, when it makes an acquisition, the company estimates 18-24 months to turn a profit. “When we buy a station, we change the format right away. We then need to market those stations, so the Disney stations are just now getting into their growth cycle.”

While the non-profit EMF does not disclose revenues, its might as a traditional broadcaster can certainly be expressed by other means. Its national Christian AC K-Love format has 558 stations in all 50 states (including 239 via translators that offer it presence to the right of 91.9 FM in numerous markets), and 283 contemporary Christian Air1 outlets in 44 states (with 149 translators).

CEO Novak tells Inside Radio that its primary revenue base comes from two week-long on-air listener pledge drives a year. It sometimes also makes a plea around the time when listeners are receiving tax refunds. The mandate throughout, he says: “We don’t change the number of songs, we try not to make it sound like a drive. We basically just talk honestly about the need. And we let listeners tell their stories about support.”

Novak adds, “We primarily use terrestrial radio, and it’s pretty simple. In an effort to be transparent, we share with listeners how many donations have been received throughout the process.”

Perhaps one reason the company’s bounty of stations is not necessarily known outside of the Christian arena is because EMF doesn’t spend money on marketing. Instead, it counts on its dedicated base to spread the word—even when a new station launches. “We really don’t have the resources to do traditional marketing; we have found that putting a station in a market and putting it on the air works for our ministry,” Novak says.

For example, when EMF launched WKLV-FM Port Chester, NY, north of New York City in the Hudson Valley market, in 2011, “We just put it in and started street talk,” he says. “The first people that called us were cab drivers. They said it put them in a better mood.” The exception: Entercom classic rock KSWD Los Angeles in November, now K-Love affiliate KKLQ. “L.A. is a little different, so we’re trying outdoor and a few other things down there.”

And about the company’s intensive growth mode: EMF has added about five dozen stations to its portfolio since 2015, with 29 in 2017 alone, according to Inside Radio figures. “We’re an opportunistic buyer,” Novak stresses. “We have a very strict set of financial numbers, because I’m playing with donation dollars rather than advertising dollars.” Explaining the company’s strategy, he adds, “We don’t take on a station we couldn’t afford or pay for. In my 21st year here, we have never targeted a radio station, a city, a community or a region. The broker has to bring them to us first. Our vetting system is pretty extensive; we’ll walk away and say no to nine out of 10.”

Novak adds that when sniffing out acquisitions, EMF looks first, at the competition in the market and second, at the opportunity to serve a need via its ministry. “That is always our focus; we want to have an impact with our ministry in the communities we serve, one through terrestrial radio and also by being hands on.”

As a post-script, while both companies employ non-traditional radio business models, make no mistake, there is still a message that EMF and Salem offer to “traditional” radio companies: “The Christian audience is incredibly valuable. They buy goods and services as actively as any other consumer,” offers Santrella. “They are loyal, and when our radio stations or our air personalities tell them about a business, that advertiser has almost instant credibility because of the environment in which the ad runs.”